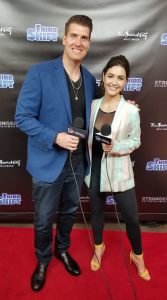 John Gearries , executive producer and creator of THIRD SHIFT SERIES gives RealTVfilms Host Maddie Makely the scoop on how he came up with the concept for the series, “basically we had a friend that had an office space and thought we can we make an afforable TV show “,  “there’s all these weird infomercial products sold in the late-night and who are these people that are answering the calls and actually taking these calls selling these products over the phone and so THIRD SHIFT was born”.  John explains that Director Rich Baker is quite the talented individual  and that he’s been doing improv for  18 years. Of the different sketches on THIRD SHIFT by Stronger Entertainment , he bulleted them out so they had an  idea of how the sketches would run but none of the dialogue was scripted . “We put the dialogue together on set and rich was great at giving it direction basically improv on improv directing”.