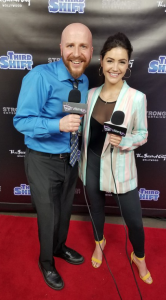 Rich Baker has very ambitious schedules with the ten episodes as part of the THIRD SHIFT SERIES by Stronger Entertainment and the longest episode is three and a half minutes. Although the episodes are shot they’re well directed episodes and were shot over two days summer of 2018. Rich Baker’s affiliation with the Second City Hollywood stems back when he started teaching with the second city in Chicago back in 2009 and moving to Los Angeles in 2014. While teaching Second City Hollywood and Rich met John Gearries of Stronger Entertainment.